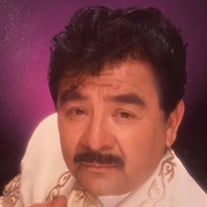 Alfonso Bryand Ayala, 76 of Phoenix, Arizona passed away on July 21, 2021 at his beloved home surrounded by his family. Alfonso was born March 20, 1945 to Jose and Beatriz Ayala in Nuevo Laredo, Mexico. He came to the United States as a young boy with his family and later became a United States citizen. On August 11, 1968, Alfonso married the love of his life Socorro Garcia Ayala. They had five children four girls and one boy. Together Alfonso and Socorro found Jehovah‘s organization and made the choice to dedicate their lives to Jehovah God by baptism in El Paso Texas in 1975. Alfonso worked for the city of Phoenix for 19 years as a tire repair man until he became disabled due to injuries to his knees and loss of hearing. Despite only going up to the 3rd grade, Alfonso’s education didn't end there. He loved to read and was self taught in many areas of life. He enjoyed taking his family and spending time with close friends traveling outdoors, camping in the woods, and spending time at the beach in Rocky Point, Mexico. He also loved listening to music and had a special talent for dancing. Alfonso was a man with unique style and grace. He was kind, loving, and wise. Alfonso Ayala, a husband, son, father, brother, grandfather, uncle, cousin, and a very dear friend to all. Alfonso is survived by his loving wife of 54 years, Socorro G Ayala: daughters; Julissa M. McClearn (Bobby), Monica T Towns (Mark), Rebecca D Canales (Michael): son; Alfonso R Ayala: brother, Miguel Ayala: grandsons; Ruben B Barela and Michael A Canales: granddaughters; Moraya S and Jazmin C Canales; Mirasia A and Naudia L McClearn; and Sienna S Towns: and many Nieces, nephews and other relatives as well. He is preceded in death by his parents Jose and Beatriz Ayala: siblings; Jose Ayala, Rosa Ortiz: and daughter; Veronica I Ayala. Alfonso Ayala remained faithful to his creator Jehovah God for 46 years until he fell asleep in death. He will be missed.

Alfonso Bryand Ayala, 76 of Phoenix, Arizona passed away on July 21, 2021 at his beloved home surrounded by his family. Alfonso was born March 20, 1945 to Jose and Beatriz Ayala in Nuevo Laredo, Mexico. He came to the United States... View Obituary & Service Information

The family of Alfonso Bryand Ayala created this Life Tributes page to make it easy to share your memories.

Alfonso Bryand Ayala, 76 of Phoenix, Arizona passed away on July...

Send flowers to the Ayala family.