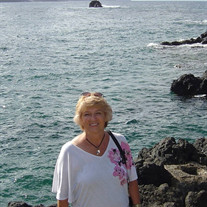 Barbara Ann Shaheen, Barbara Ann Shaheen, 73, passed away on May 17, 2020. She is survived by her son Sean Shaheen; daughter Sheri Shaheen; former husband of forty-four years William Shaheen; brother James Hart, Jr.; nieces Ronica Mooney and Francine Hart Chalmers; and nephews Allen Hart and Howard Hart. She also leaves behind dear in-laws and friends in Diane Hart, Judith Herzog, Candace and Glenn Cybator, Michael Herzog, Brenda Bilek, Diana Cleary, Richard DeLeon, Shana Abé, and many others. She was preceded in death by her mother Francis Riddle, father James Hart, stepfather Howard Riddle, brother Ronald Hart, and sister-in-law Hazel Hart. Born in Pittsburgh, Pennsylvania, on September 11, 1946, Barbara graduated from Allegheny High School in 1965 and later went on to graduate from Robert Morris College with a B.S. in Economics. During her career, she worked for ATandT, the United States Army Corps of Engineers, the State of Arizona, and the United States Census Bureau. Throughout it all, she brought dedication, perseverance, and a strong sense of ethics to her work. Many of her lifelong friendships were formed due to the loyalty and compassion that she showed to her colleagues. Barbara loved animals, and many dogs, cats, and other pets could always be found in her home, happy to be in her nurturing presence. She also loved reading and was a lifelong learner, always seeking new ways to think and to be, exploring life with a constant curiosity. All of her actions were guided by an unyielding generosity, and she gave of herself without hesitation to family, friends, colleagues, and strangers alike. Her innate kindness, empathy and ability to bring joy to others were hallmarks of her being. Her untimely departure from this world belied her vivacity and youthful energy. She will be remembered for her infinite capacity for love, devoted friendship, prodigious strength of mind and spirit, and ever-present laughter. She will be forever loved as a mother, wife, and true friend to those who were fortunate enough to be in her life. Barbara will be laid to rest at the Resthaven Park Morturary and Cemetery in Phoenix. In lieu of flowers, donations may be made in tribute to her at St. Mary's Food Bank at .

The family of Barbara Shaheen created this Life Tributes page to make it easy to share your memories.

Send flowers to the Shaheen family.