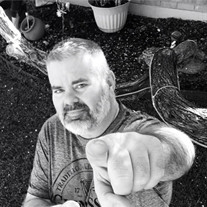 Brent Leroy Farley Jr. was born on July 20th, 1972 to Brent Farley Sr. and Judi Cornwell in Phoenix, Arizona. He attended Independence High School and graduated from Westwood High School in 1992 before he went through several odd jobs, picking up the wide range of skills and hobbies he came to be known for. He was active in Biltmore Church of the Nazarene, especially the youth group. His participation in youth group activities and vacations led to the meeting of BJ and Kathy when their churches joined a trip to California. On January 15th, 1994, BJ married Kathy Pikulik at Mesa First Church of the Nazarene surrounded by their friends and family as they united as The Farley's. Two years later in 1996, they welcomed their first daughter and a second daughter followed in 2004. BJ and Kathy were devoted to each other, their kids, the number of rabbits, dogs, and cats they have had through the years, and their faith. They remained active in each church they attended, especially seen in the beautiful wooden cross that now hangs in the sanctuary of Apple of His Eye church. BJ tackled every industry and every skill under the sun. He worked as a tow truck and limousine driver, even driving Kool and the Gang around. In his free time, he hung around his daughters' schools, eating an entire classroom supply of marshmallows until he became known as Marshmallow Man. He loved teasing all of his daughters' friends, loudly drawing attention to them during school lunches, telling embarrassing stories, and always bringing great food with him. BJ passed away in the early morning on March 21st, 2019 in Gilbert, Arizona. He is survived by his loving spouse of 25 years, Kathy, his two daughters Kaitlin and Karissa, his mother, Judi Cornwell, his father, Richard Cornwell, and his biological father, Brent Farley Sr., and four siblings: Jimmy Farley and his wife, Kristan, Will Farley and his wife, Megan, CJ Gaedecke and her husband, Paul, and Missy Johnsen and her husband Robert. He is also survived by his aunts, uncles, nieces, nephews, and cousins, as well as his protective cat, Cherokee, and dog, Dallas. Funeral services and viewing will be held at Desert Springs Bible Church on Saturday, April 6th, 2019. The viewing will be from 10:00-10:30am, followed by the service from 10:30-12:00pm. It will be officiated by Pastors PD Williams and Jimmy Farley and followed by a grave-side service at Green Acres Cemetery at 1:00pm. Addresses and directions are provided below. BJ was not a formal person. He loved his jeans, cowboy boots, and hat, as well as his long grey beard. He would not want his friends and family to be uncomfortable in his honor, but to wear something green in honor of BJ's favorite color. The family also asks that you not send any flowers, arrangements, or balloons-BJ's dislike of balloons was very well known. Instead, they ask that you consider donating to BJ's funeral fund, or to the Arizona Burn Foundation in his honor. GoFundMe is here ... and the link for the Arizona Burn Foundation is here... https://azburn.org/donation-page/

The family of Brent Leroy Farley Jr. created this Life Tributes page to make it easy to share your memories.

Send flowers to the Farley family.