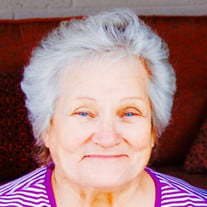 Charlotte Ann Macak Kroulik, age 84, was able to join Jesus on April 17,2020 after a short battle with lung cancer. She was born on April 29,1935 in Chicago, Illinois to Paul A. Halas and Elonia Bernadette Halas Kral Osted. Charlotte resided the last few years of her life with her sister Dolores and nephew Christopher in New River, AZ. She was a graduate of Reavis High School in Burbank, Illinois. In1975 she moved to Arizona and resided in Phoenix. She had an opportunity to move to Prescott Valley in 1989 and spent most of her life there. With her various work skills, she spent many years working for White Castle Restaurant in Illinois. After moving to Arizona, her accounting skills landed her a job with the City of Phoenix, and for Durant's Restaurant on Central Avenue. Charlotte was a great cook and baker, a gardener, an avid crocheter and a skilled seamstress completing numerous sewing projects including making many special handmade gifts for her family. She was unbeatable at Scrabble. She loved to write poems, some of which were published and she was a short story writer. She would often say, "I woke up this morning and there it was in my mind" - beautiful poems from her heart. Charlotte loved the Lord very much. She had a very generous heart. She was a very compassionate person and always had a few good words to say about any situation. She loved to sing and tell stories. She was also very witty and loved to make people laugh. She was known to strike up a conversation with just about any stranger she came across. She never shied away from speaking her mind. She touched countless lives throughout her years. Charlotte loved her family dearly, she was full of unconditional love and she wanted everyone to love one another. As her final wish, she wished for her sons and all of her grandchildren and great-grandchildren to have a happy future with love and kindness and blessings of the Lord Jesus. She will be greatly missed. Charlotte is survived by her Brother Paul Halas, Jr., and sister Dolores Sawka; sons John and his wife Gina Macak and LeRoy Timmons: Grandaughter Michelle whom she raised; 6 additional Grandchildren as well as numerous great grandchildren and nieces and nephews. She left behind many others who called her "Grandma". She was preceded in death by her parents Paul and Elonia, her daughter Janette and her grandsons Samuel and Daniel. She will be laid to rest at Greenwood Memory Lawn Cemetery, 2300 W Van Buren St, Phoenix, AZ 85009 with a graveside service at 10:30am on April 23, 2020. A Mass for her Intention will be live streamed on Facebook at St. Germaine of Prescott Valley on Tuesday, May 19th at 8:00am. (https://www.facebook.com/groups/108947452775)

Charlotte Ann Macak Kroulik, age 84, was able to join Jesus on April 17,2020 after a short battle with lung cancer. She was born on April 29,1935 in Chicago, Illinois to Paul A. Halas and Elonia Bernadette Halas Kral Osted. Charlotte resided... View Obituary & Service Information

The family of Charlotte Kroulik created this Life Tributes page to make it easy to share your memories.

Send flowers to the Kroulik family.