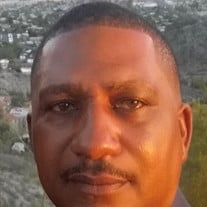 D'Artanion Roi Jamerson. Also known as—Doctarie, Duke, Wolfman, DAR, Darth, Dar-Dar, Better known as, DART! He was born in Pasadena, CA on September 27, 1966 to his mother Esther and his father Roy Jamerson. From an early age Dart proved to be athletic, playing sports such as, baseball, basketball and football. He loved to play basketball the most, but he really excelled at football. He was awarded a college scholarship for his abilities. This was shown thru his position as a DB where he proudly wore is favorite number, "9". He continued to be a huge sports enthusiast and developed a love for the game of golf. Any chance he got you could find him on a local course, playing 9, 18 or when he couldn't get enough 36 holes of golf till the sun went down. He also developed a fondness for and fell in love with his wife Athena. They met in the late 80's. If you've heard the story from him, it went like this "she flagged me down!" But according to his wife "he pulled over and offered me a ride to work", she also says that when they met "it was love at first sight" she told her best friend Miranda "that's the guy I'm going to marry". After a brief courtship the two married on July 26th, 1991 Soon after they began to study the Bible with Jehovah's witnesses and then dedicated their lives to Jehovah in July of 1992. Over the years D'Artanion's love for serving Jehovah and the congregation was evident thru the privilege of serving as a Ministerial Servant, Congregation Elder and Congregation Secretary. Through his diligent study of God's word, he developed into an admirable teacher and eloquent speaker. He delivered many public discourses on a variety of Bible based subjects. In fact, he gave his last talk on Wednesday, May 8 th, 2019. On a lighter note, Dart appreciated a wide variety of music including Kingdom Melodies, Jazz, RandB and Old School. For those of you who knew Dart really well, you knew him as "BBSC" and you know what that means. To his grandson Kai, he was just "BB". To give you an idea of his sense of humor…he had a friend convinced that his job was just to go around and collect checks! When you think of D'Artanion, remember his quiet and mild spirit. He absolutely proved to be a man of integrity!

The family of D'Artanion Roi Jamerson created this Life Tributes page to make it easy to share your memories.

Send flowers to the Jamerson family.