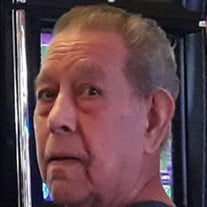 Danny was born on July 21, 1945, to Frank and Maria Lopez in Superior, Arizona. Maria would always have his favorite meal ready for him , red chili con carne and homemade tortillas. Still to this day before his passing he would always talk about and would crave his favorite meal. His parents bought him his first car which was a 1958 Impala. This is where his passion for cars started. Although he didn’t get a chance to complete school, he knew being a miner was going to be his way of living but taught many life lessons. Danny knew his forever was with Loretta. She was walking home one day from school and Danny asked Loretta if he can take her home and she kindly declined. The opportunity happened again and she said yes. On August 11, 1963, was the day they decided to get married and make a promise to each other that their love will forever be intertwined. They had many dreams to accomplish and by doing that they worked 2 jobs at a time to save up on what will be called their “heaven.” In 2002 they made a dream of theirs come true, they bought their land in Pinetop, Lakeside and made a paradise not just for them but for all there loved ones to enjoy as well. Danny felt peace and healing at his home up north. As long as he had his recliner, pack of smokes, and a chair outside to watch his squirrels, elk and deer, he was literally in “heaven.” His life was complete and was proud. Danny was a hardworking father and husband. He dedicated his long hours as a miner at the Magma Mine. He worked when he was sick and he worked when he was worn out from so much physical work in the mine. He made sure his girls always had what they needed for school, food on the table, and roof over their heads. He gave his 24 hard working years at the mine when they needed to make a transition down to Gilbert, Arizona. Danny proudly served Gilbert schools for 20 years and had to end his time due to his health conditions. Even when he was not working he had many stories about working in the mine which reminded us all how grateful we were for all he had done and continued to do. With his time off and battling his health conditions he still made sure to have his fun as he would say, “life is too short.” He enjoyed being around his children and grandchildren whether it be having his favorite Peter Piper Pizza, pepperoni and jalapeno pizza with them or his scrambled eggs with papas and chorizo for breakfast. We cannot forget his two favorite casinos Fort McDowell and Hondah. Mind you the max bet he would only do was 20 cents and was so happy if he left with a winning of $40. Those random jeep rides he would take to go scouting so he can find a good hunting spot. He would always hoped to bring a big one back. Danny had a set schedule of his favorite T.V. shows it went like this. Price is right at 9am, Let’s Make a Deal at 2pm, NBC 12 news at 4pm, Wheel of Fortune at 6pm and his Novelas at 7pm. Sunday he would be reserved for his #1 team in America, the Dallas Cowboys. Danny is survived by his wife Loretta M. Valenzuela of 58 years of marriage followed by his daughters Laureen Hernandez, Tina Valenzuela. and Danielle Carrillo. He had 3 grandsons Alex, Anthony and Troy along with 3 grand-daughters Deanne, Cristal, and Selena. Along came his 4 great-grandchildren Roselyn, Jizelle, Aliou and Ismael. Danny was a loving father, husband, grandfather, great-grandfather, and a true friend to many

Danny was born on July 21, 1945, to Frank and Maria Lopez in Superior, Arizona. Maria would always have his favorite meal ready for him , red chili con carne and homemade tortillas. Still to this day before his passing he would always talk... View Obituary & Service Information

The family of Danny Lopez Valenzuela created this Life Tributes page to make it easy to share your memories.

Send flowers to the Valenzuela family.