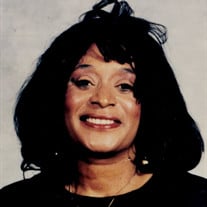 Devorah Marie Carlisle, 64, of Goodyear, passed away on October 28, 2018 in Goodyear, AZ. She was born on June 13, 1954 to John H Battle and Doris M. (Henderson-Isler) Battle in San Pedro, CA. She attended school in Wilmington CA, graduating from Banning High School. She received a cosmetology and clerical certificate in Los Angeles. Devorah worked as a Clerical Secretary for Santa Fe Rail Road Co for several years. She later met and married John D. Carlisle and they moved to Long Beach CA where they had 2 children. Devorah later separated and in later years moved to be with her now adult children in Goodyear, AZ. Devorah is survived by her children, son, Shaun Dupre Carlisle of Goodyear, AZ; daughter, Shanel Marie Carlisle of Goodyear, AZ; daughter-in-law, Alba and granddaughter, Mila of Goodyear, AZ. She will be remembered by 6 siblings, a host of nieces and nephews and cousins. She was preceded in death by father, John Henry Battle, mother, Doris Marie Battle and grandparents, William H. and Essie L. Isler. Funeral services will be held on Saturday, November 10, 2018, 11:30 am at the Mountain Park Community Church, Phoenix, AZ. Burial will take place in the Tempe Double Buttes. Online condolences can be given at www.samfhaz.com.

The family of Devorah Marie Carlisle created this Life Tributes page to make it easy to share your memories.

Devorah Marie Carlisle, 64, of Goodyear, passed away on October...

Send flowers to the Carlisle family.