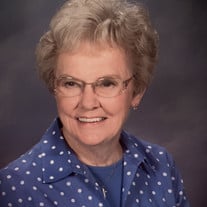 Donna Lee Staats, 88, of Pinetop, was born on November 26, 1930 in Howells, Nebraska to a German farming family. Donna was a twin to her brother and best friend, Donald Lee. They had three older sisters and two older brothers (Mildred Brahmer, Howard Remm, Norman Remm, Frieda Roberts, and Shirley High), all who have preceded her in death. Donna, Donald and their parents left the farm and moved to Casa Grande in 1943 for Donald's health. It was there she met Charles Staats who was her classmate at Casa Grande Union High School. She attended Lamson Business College and married Charles in 1950 just before he enlisted in the United States Air Force. Their marriage was blessed with three children: Charles William Jr., Michael Donald, and Deborah Lee, all whom reside in the Phoenix area. Donna enjoyed her 25+ years working in numerous capacities for Casa Grande Union High School and made many life-long friends while there. She and Charles retired together in 1989 and moved full time to their summer home in Pinetop. They thoroughly enjoyed their nearly 20 years of retirement by travelling to 48 of the 50 states and taking several cruises with family and friends. Their marriage of 57 years ended when Charles passed in 2007. Donna enjoyed serving the Presbyterian Church in Pinetop and spent countless hours sewing crafts, baking and cooking for fund raisers, and serving as treasurer for the Presbyterian Women's group. More than anything she loved her family. She was a devoted wife, mother and grandmother and gave her love freely and without question. She was patient, forgiving, generous, thoughtful, caring and selfless. Donna left this earth for her heavenly home on March 25, 2019 after a yearlong struggle with cancer. She is survived by her three children and their families: her son Bill and his wife Carolyn, her son Mike and his wife Gina, her daughter Debbie, her grandchildren Paul Roman and wife Ana, Stephanie Saunders and husband Kent, Liana DeMar and husband Chris, Shelby Staats , Michael C Staats and Jacob Drewencki, and 9 great-grandchildren along with many treasured nephews and nieces across the country. Memorial services will be held on Saturday, March 30, 2019, 11:00AM at Liv Generations Ahwatukee Senior Living (address and directions are provided below) with Pastor Allan Fuller officiating.

Donna Lee Staats, 88, of Pinetop, was born on November 26, 1930 in Howells, Nebraska to a German farming family. Donna was a twin to her brother and best friend, Donald Lee. They had three older sisters and two older brothers (Mildred Brahmer,... View Obituary & Service Information

The family of Donna Lee Staats created this Life Tributes page to make it easy to share your memories.

Send flowers to the Staats family.