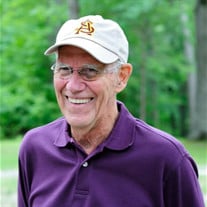 Edward M Baker of Binghamton, NY Edward Baker, 81 of Binghamton, NY and Goodyear, AZ passed away peacefully surrounded by his loving family on May 21, 2020, after just four short days of being diagnosed with lung cancer. Ed was predeceased by his loving wife Beverly Baker, his parents Paul and Lillian Baker; two brothers Everett and Terrance and four sisters Jackie, Joyce, Kathleen and Jean, his Mother and Father-in-law George and Esther Slocum and Brother-in-law Douglas Cirba. He is survived by his children Edward F Baker (AZ), Mark (Laura) Baker (NH), Douglas Baker (NY) and Kimberly (Thomas) Mraz (AZ), Stepdaughter Mary Jo McManus (NY). He had eleven Grandchildren (Ed) Lindsay, Eddie and Daniel (Mark) Brittany, Brandy and Netaya, (Doug) Logan, (Kim) Mitchell and Alayna, (Mary Jo) Chucky and Chris. He had six Great Grandchildren (Ed) Hayden, (Mark) Mason, (Kim) Sawyer, Charlotte and Claire, (Mary Jo) Jameson. Siblings Justine (Doug) Jenner, Janet Hibbard, Theresa (Gary) Parker, Paul (Lindsey) Baker, David (Bonnie) Baker, Patricia (Doug) Anderson, Sister-in-law Diana (Stan) Isham. Also many nieces, nephews and cousins. Devoted lifelong friends Gerald and Gwen Knickerbocker and family, Ed graduated from Binghamton Central in 1957. He served his country in the US Army. He retired from the City of Binghamton after 30 years of dedicated service and he was the co-proprietor with his wife of Daniels Restaurant in Johnson City, NY. He always had a smile on his face and everyone loved him. He was the "Applebee's Guy" in Goodyear AZ, he loved meeting new people and telling his stories, he was an impeccable dresser who clearly demonstrated the importance of ones personal appearance. He was quirky, quick-witted and endearing. He was an extraordinary man who was loved by many and will be missed by all. A celebration of life will be held in his hometown of Binghamton, NY at a time in which we can have a safe celebration. Details to be determined and announced through social media. We would like to close with Ed's famous saying, "You're doing' a fine job".

Edward M Baker of Binghamton, NY Edward Baker, 81 of Binghamton, NY and Goodyear, AZ passed away peacefully surrounded by his loving family on May 21, 2020, after just four short days of being diagnosed with lung cancer. Ed was predeceased... View Obituary & Service Information

The family of Edward Baker created this Life Tributes page to make it easy to share your memories.

Send flowers to the Baker family.