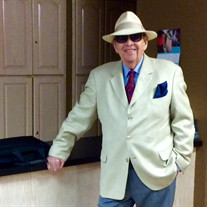 Efrain Coral Carrasco fell asleep in death in his home of 60 years with his family at his bedside on November 8, 2021. Known by his friends and acquaintances as Frank, to his daughters Karen and Cheryl as Daddy, and to his grandchildren, great grandchildren, great-great grandchildren and to many close friends, he was affectionately called “Tata.” Frank was born on July 21, 1926, in Phoenix, Arizona to Rosario Herrera and Jesus “Chito” Carrasco. He was 95 years old at the time of his passing. He would often say, “I’m 95 but I feel 87.” It would bring a smile to all, perhaps because he and those with him really believed it. His youthful and dapper appearance, along with his disposition, would easily make one think he was even younger. Frank was a man of stature. An honest, generous, and hospitable soul. He was not a pretentious man but truly genuine. Despite having little formal education, his work ethic as a young man was remarkable. As a result of the skills he acquired, he held positions as shipping and receiving manager for Porter’s stores for 18 years and at the Biltmore Fashion Mall for 21 years until his retirement in 1983. Frank was self-taught and well-read. This became helpful to him when he decided to learn for himself what the Bible really teaches. He greatly appreciated the help Stella, his wife of 63 years, gave him as he acquired knowledge and understanding of the scriptures. What he learned during his studies affected his view of life and the importance of always trying to do the right thing. He made changes in his personality; he would often say how the Bible truths he was learning were “really changing me for the better.” In 1984 Dad was baptized as one of Jehovah’s Witnesses. After his baptism he said, “Now I am a brother.” He proved to be a fine spiritual brother until his final hours. Frank treasured the time he spent with his wife Stella as they engaged in spiritual activities. They faithfully did so together until her death in 2014. His resolve to stay true to the dedication he made did not waiver. He faithfully continued his spiritual routine until he could no longer physically do so. He was present for his last congregation meeting the week he succumbed to the “enemy” death. He would remind us to make sure we “Belt it out!” when his favorite Kingdom songs were played. He did “belt it out” one last time. Efrain C. Carrasco leaves behind his daughters, Karen Contreras (Frank Contreras) and Cheryl Garcia; his grandchildren, Sean Contreras, Sacha DaSalla (Paul DaSalla), Dominique Contreras (Roberta Contreras), Cristal Coppock (Stephan Coppock), Robert Vazquez, and Adrian “Woody” Garcia; 15 great-grandchildren, eight great-great-grandchildren and a large extended family including nieces and nephews. He will be greatly missed as a father, grandfather, and friend. In lieu of flowers please consider donating to Hospice of the Valley. Memorial Service via Zoom will take place Saturday, December 18th at 1:00 p.m. Arizona Time Join Zoom Meeting https://us02web.zoom.us/j/86951159933?pwd=cTJtUzByS3BjWjg5RVZIRUh6N1RrQT09 Meeting ID: 869 5115 9933 Passcode: 376324 **************************************************************************************************

Efrain Coral Carrasco fell asleep in death in his home of 60 years with his family at his bedside on November 8, 2021. Known by his friends and acquaintances as Frank, to his daughters Karen and Cheryl as Daddy, and to his grandchildren, great... View Obituary & Service Information

The family of Efrain Coral Carrasco created this Life Tributes page to make it easy to share your memories.

Efrain Coral Carrasco fell asleep in death in his home of 60...

Send flowers to the Carrasco family.