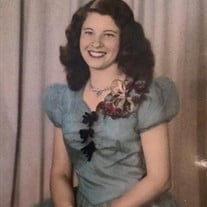 On December 17, 2020, Georgia Anna (Chambers) Bilbrey passed away at the age of 89. She was born on January 18, 1931 in Clovis, New Mexico to James and Leona Chambers. She married the love of her life, Thurman H. Bilbrey on January 28, 1962 at Ft. Rucker, Alabama. Thurman preceded her in death four days prior to her passing. She spent the next 30 years as an Army wife and became an expert packer and organizer moving every three years for most of his active-duty career. She was immensely creative and while living in Germany, she designed chandeliers and implemented hosting several bazaar events at the Officers Club. Georgia was an incredibly wonderful mother and friend. She had two daughters, but she was affectionately called “Mom” by many. She truly never met a stranger. She had a special gift of making others feel beautifully welcomed and accepted, and a heart of compassion that always championed those that were less fortunate. She loved fresh flowers and served on a welcoming committee delivering baskets to new residents while living in Oklahoma City. She loved God deeply and she taught us to honor God in every area of our life. She enjoyed cooking, kept an immaculate home, could re-purpose absolutely anything, and loved to sew. Most of all, Georgia loved her family and enjoyed her role as “Grammy” to her five grandchildren. Even her daughters began to call her “Grammy” as she responded in quicker fashion to that name. In July of 2020, Georgia and her husband moved to Arizona to live with her daughter Diane and her family. Georgia is survived by her daughters, Diane Basgall, (Scottsdale, AZ), husband Bill and their two children, Evan and Olivia and also her daughter, Carol Becker (San Ramon, CA) husband Doug and their three children, Alicia, Thomas and Jaden. She is also survived by her sister, Winona McAlexander and her brother, Frank Chambers of Amarillo, Texas.

The family of Georgia Anna Bilbrey created this Life Tributes page to make it easy to share your memories.

Send flowers to the Bilbrey family.