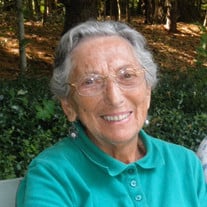 Gloria Kamen Charney, beloved wife, sister, and mother of three, passed away in her sleep on August 18, 2019 at 96 years old. She was living in Phoenix, Arizona, where Tina, her eldest daughter, could visit frequently. Gloria lived a full life. Born in Queens, New York, on April 9, 1923, to Russian Jewish immigrant parents, she spent the hot New York summers in Coney Island looking after her younger sister, Phyllis. Gloria graduated from Pratt University with a Fine Arts degree and married Elliot Charney. They had three daughters., two while Elliot studied for his PhD, and moved to Maryland. Using her maiden name, Gloria Kamen, she illustrated over 40 books including the Betty Crocker Cookbook for Boys and Girls (1957). Gloria also wrote eight books for children and young adults including "Paddle, " Said the Swan and a biography of music composer Fanny Mendelssohn. Her love of music led her to paint 25 portraits of composers. She also loved theater and her sketches of actors in rehearsal accompanied many theater reviews in The Washington Post. Gloria also presented many "chalk talks" at elementary schools to introduce children to the world of book illustration. She and her husband designed and built a farmhouse in Vermont, where they retired in 1993 and hosted friends, family, and especially, their grandchildren. She is predeceased by her mother and father, Tillie and Herman Kamen, and her sisters, Ruth Kamen and Phyllis Pilisuk. Gloria is survived by her daughters Tina, Ruth, and Juliet Charney, her sons-in-law William Partlan and Stephen Cecchetti, brother-in-law Marc Pilisuk, her niece and nephew Tammy and Jeffrey Pilisuk, and grandchildren Daniel and Ethan Cecchetti and Nathan and Alisa Partlan. Her always positive outlook, tenacity, artistic talents, and love of family and friends will be remembered and cherished by all. If you wish, you may donate in her name to the Starkey Hearing Foundation or Reach Out and Read.

Gloria Kamen Charney, beloved wife, sister, and mother of three, passed away in her sleep on August 18, 2019 at 96 years old. She was living in Phoenix, Arizona, where Tina, her eldest daughter, could visit frequently. Gloria lived a full... View Obituary & Service Information

The family of Gloria Charney created this Life Tributes page to make it easy to share your memories.

Send flowers to the Charney family.