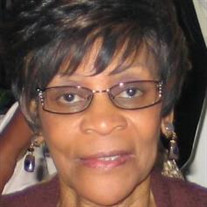 Mrs. Gloria Raibon passed away in her Tolleson Arizona home at the age of 82 on October 17, 2021. She was born Gloria Elizabeth Edwards on August 5, 1939 in Goldsboro, North Carolina to the late George (World War I veteran) and Lillie Mae (Laundress) Edwards. She remained deeply saddened by the loss of her father as a toddler and her mother later married Thomas “Mr. Tom” Foxworth who would help to fill the void. She shared many fond memories growing up in the tight knit Goldsboro, NC community during the Jim Crow era and was a proud alumnus of Dillard High School. At a young age she met and married James Kelly (U.S. Marine). Following the dissolution of her marriage, she met Will Mitchell Jr. (U.S. Airforce) and left North Carolina, eventually settling down in Phoenix, Arizona in the 1970’s. In 1986 she married Sidney Raibon with whom she would spend the remainder of her life. Gloria was the mother to 12 children and stepchildren. Gloria Raibon was a strong and resilient woman. To improve her circumstances, she attained her GED and graduated from Phoenix College with an AA degree in the 1980’s. After working for Maricopa County Assessor’s office, and later the State of Arizona Department of Appeals she retired in July 2007. A passionate civil rights activist her entire life, throughout the 1980’s and 1990’s she was an active member of the Urban League and served in the role of Vice-President for the Phoenix chapter. Gloria was a devout Jehovah’s Witness who gave witness to countless people in the about Jehovah’s love and wisdom. Forever young, Gloria was a fierce competitor when it came to bowling and card games. She loved dancing to her favorite soul music, and shopping for the latest styles. Her friends and family could count on her to be the best dressed for all occasions. Gloria could talk and loved to regale her friends and families with stories about her feisty mom and aunts, growing up in North Carolina, and she enjoyed engaging in spirited debate. After retiring, she traveled to spend time with extended family and to attend Dillard High School class reunions. Mrs. Raibon is preceded in death by her brothers James “Ralph” Edwards and Eddie Foxworth, her son Will Mitchell III, daughter Gloria Roberson, and grand-son Darrell Mitchell. Gloria is survived by her loving and devoted husband of 35 years Sidney Raibon, her siblings Hilda (Matthew) Pate of Goldsboro, NC, George Edwards, Jr. of West Haven, CT, and Hazel White of Goldsboro, NC., and her children and stepchildren: Pete (Betty) Kelly of Bailey, NC; Gary Kelly of Phoenix, AZ; Torrano “Tony” Kelly of Tucson, AZ; Sharon Melvin of Greensboro, NC; Michele (Reggie) Porter of Phoenix, AZ; Melanie (Dwayne) Douglas of Minneapolis, MN; Darrel (Angie) Mitchell of Waynesboro, VA; Furnell Mitchell of Gainesville, FL; Reginald “Reggie” Raibon of Milwaukee, WI, and Regina Raibon of Phoenix, AZ. She was a beloved grandmother to her 26 grandchildren who respected and adored her in addition to 45 great-grandchildren. ************************************************************************************************************

Mrs. Gloria Raibon passed away in her Tolleson Arizona home at the age of 82 on October 17, 2021. She was born Gloria Elizabeth Edwards on August 5, 1939 in Goldsboro, North Carolina to the late George (World War I veteran) and Lillie Mae... View Obituary & Service Information

The family of Gloria Elizabeth Raibon created this Life Tributes page to make it easy to share your memories.

Mrs. Gloria Raibon passed away in her Tolleson Arizona home at...

Send flowers to the Raibon family.