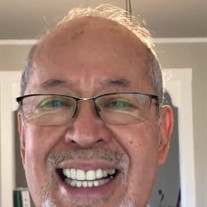 Herman R. Castillo, 77 of Goodyear, Arizona, went home to be with the Lord on March 1, 2021. Herman was born December 8, 1943 to Ruben and Guadalupe Castillo in San Antonio, Texas. As a boy he attended many schools and worked alongside his family in the migrant fields all the while graduating from 8th grade in Dixon, California and later getting his General Education Diploma. He enlisted into the United States Army in 1967. He was sent to Fort Benning, Georgia and For Campbell, Kentucky for infantry training and later deployed to serve as a paratrooper in the Vietnam War. He was awarded the Bronze Star for his distinguished heroic achievement while engaged in action against an enemy of the United States. He returned home from Vietnam in December 1968 and finished his duty with the United States Army. He was introduced to Virginia Canez in May of 1969 by his sister Anita Celestino. They began dating and were married 6 months later on November 14, 1969. During this time he began to use his GI bill and attended trade schools with his brother David. They tried various vocations but were hesitant to stick to one, even playing hooky to go watch Monday Night Football games. He worked as a furniture mover with his friends the Cruz’s before becoming a floor installer with his brothers. He worked in Sun City along with his brothers doing residential flooring for 10 years before they ventured on their own. He was the owner of Castillo Floor Covering, mentored and taught his sons, grandsons, nephews, family friends and anyone that was willing to work and learn. He enjoyed his work, doing both commercial and residential floors. He was a perfectionist always wanting to get the job done right going above and beyond for his clients. Together they had three children, Mando, Gabriel and Eleanor living a majority of their lives on Castillo Lane, in Goodyear. He was the breadwinner, always working and providing for his family, while Virginia stayed home to care for the children. Although this took him away from them, it was a sacrifice he was willing to make to know they were well cared for. Herman faced many hardships throughout his life from Ginny’s medical conditions, self-employment, and trauma endured in war. He began to seek help from the VA in 2004. While receiving help, he became more involved with his family and began to open up more about his time in Vietnam. During this time he also recommitted his life to Christ and began a stronger relationship with the Lord. He created a spiritual routine of reading the Word, praying in his closet, fasting and tithing. God did a mighty work in his heart allowing him to be more giving, loving, attentive, compassionate, and humble. He was a member of St. John Vianney Parish in Avondale, Arizona. He is survived by his children, Linda Castillo, Lisa Gronau, Mando Castillo, Gabriel Castillo, and Eleanor Castillo, grandchildren: Adam Gronau, Mark Gronau, Gabriel Castillo Jr., Zackary Castillo, Dillon Castillo, Gia Yates, Kaylee Castillo, Nico Yates, great-grandchildren, Trig, Kyler, Ali, Izaac, Joey, Ezra, Anna, siblings: Chris Castillo (Irma), Anita Celestino(Pete), Benny Castillo (Gloria), David Castillo, Stella Samaniego (Francisco), Charlie Castillo (Norma), Margie Castillo, he is met in Heaven by his parents Ruben and Guadalupe Castillo, his loving wife of 51 years, Ginny Castillo, his brother Ruben Castillo, and his grandson Anthony Castillo. Herman was a father not only to his own children but to so many others, this is also true for his title of Tata and brother. He was strong yet never afraid to show his love, a giving man who was always there for everyone.

Herman R. Castillo, 77 of Goodyear, Arizona, went home to be with the Lord on March 1, 2021. Herman was born December 8, 1943 to Ruben and Guadalupe Castillo in San Antonio, Texas. As a boy he attended many schools and worked alongside his... View Obituary & Service Information

The family of Herman Rocha Castillo created this Life Tributes page to make it easy to share your memories.

Send flowers to the Castillo family.