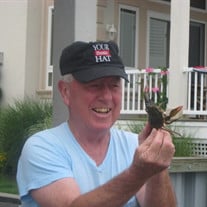 Joseph Michael Brady, age 82, passed away surrounded by his family, on February 11, 2021 in Phoenix, AZ. He was born in Philadelphia, to Irish immigrants, and raised in the Olney Section of Philadelphia. Joseph graduated from Saint Joseph's Preparatory School and then from La Salle University. Joseph was commissioned as a 2nd Lieutenant in the United States Army Reserve. His active-duty service was as an artillery officer in the First Infantry Division, known throughout history by its nickname, "The Big Red One". Joseph returned to Philadelphia where he met his wife Jacqueline. They were married for 56 years and raised three children in Cherry Hill, NJ and summered at the family home in Somers Point, NJ. In 2003, Joseph and Jacqueline retired after his two-decade career in sales management with a real estate information technology company. They enjoyed retirement at their homes in Phoenix, AZ and Somers Point, NJ, visiting their grandchildren and enjoying the desert and ocean. Joseph and Jacqueline worked in retirement for the Los Angeles Angels, each Spring Training in Tempe, AZ. Joseph was a member of the American Legion Post #352 in Somers Point, NJ. An avid baseball fan, Joseph followed the Philadelphia Phillies, Camden Riversharks, and Atlantic City Surf. Joseph was proud to be a patriotic American of Irish descent. He could easily break into a verse of "Danny Boy", always stood for the National Anthem, and flew the American flag daily. Joseph was predeceased in death by his parents Joseph V. and Margaret Hogan Brady. Joseph is survived by his loving wife, Jacqueline Brady (nee McCluskey), his three children Brian Brady (wife: Debra) of San Diego, CA, Maureen McLoud (husband: Mark) of Phoenix, AZ, Molly McHugh (husband: Michael) of Cherry Hill, NJ, and six grandchildren: Maggie Brady of San Diego, CA, Morgan, Matthew and Michael McLoud of Phoenix, AZ, and Andrew and Ryan McHugh of Cherry Hill, NJ. A Celebration of Life will be held for Arizona family and friends at his daughter's home in Phoenix, AZ on Saturday, February 20, 2021. Visitation with family and friends will be held at 10:00AM and A Mass of Christian Burial will follow at 11:00AM on Wednesday March 17, 2021 at Christ Our Light Catholic Church, 402 Kings Highway Cherry Hill, NJ 08034.

Joseph Michael Brady, age 82, passed away surrounded by his family, on February 11, 2021 in Phoenix, AZ. He was born in Philadelphia, to Irish immigrants, and raised in the Olney Section of Philadelphia. Joseph graduated from Saint Joseph's... View Obituary & Service Information

The family of Joseph Michael Brady created this Life Tributes page to make it easy to share your memories.

Joseph Michael Brady, age 82, passed away surrounded by his family,...

Send flowers to the Brady family.