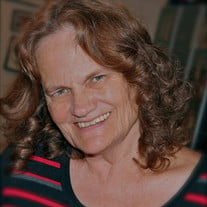 Judith Carol (Johnston) Cook, 76, of Maricopa, Arizona, formerly of Draffenville, Kentucky, departed to her eternal rest with the Lord on January 28, 2020. Judy was born on January 30, 1943, in Sylacauga, Alabama, where her father worked at the Manhattan Project DuPont plant during World War II. She was the daughter of Karl. M. and Mary Alice (Mathis) Johnston, of Hardin, Kentucky, and East Peoria, Illinois. Judy was a survivor of polio, which she contracted when she was just four years old. She graduated from East Peoria High School in 1961 and attended Illinois State University. She was a devoted wife, mother, and grandmother and worked as a homemaker, special education aide, nursing home activities coordinator, and home health aide. She enjoyed singing in church, traveling, playing the piano and organ, cake decorating, crafting, playing Rook, bargain shopping, gardening, and spending time with her children and grandchildren. She loved to laugh. She was predeceased by her parents. She is survived by her brothers, Byron M. "Matt" Johnston of East Peoria and Timothy C. Johnston of Almo, Kentucky, and their families; her husband of 57 years, Hafford E. "Ed" Cook, also of Maricopa; her four children, Quintin Cook of Aurora, Colorado, Jana Fredericks of Rock Island, Tennessee, Gretta Roberts of Farmington, New Mexico, and Hannah Cook Cross of Maricopa; nine grandchildren, Jackie Kessler, Mario Pezzimenti, Max Fredericks, Danae Bouldin, Lily Fredericks, Rylan Roberts, Annabella Roberts, Finley Cross, and Fiona Cross; and three great-grandchildren, Hunter, Stormie, and Blaze Pezzimenti. She was a member of the Church of Christ at Maricopa and formerly a member of Fairdealing Church of Christ in Benton, Kentucky. A visitation will be held at Collier Funeral Home in Benton, Kentucky, and she will be buried next to her parents at Union Ridge Cemetery in Aurora, Kentucky.

Judith Carol (Johnston) Cook, 76, of Maricopa, Arizona, formerly of Draffenville, Kentucky, departed to her eternal rest with the Lord on January 28, 2020. Judy was born on January 30, 1943, in Sylacauga, Alabama, where her father worked at... View Obituary & Service Information

The family of Judith Cook created this Life Tributes page to make it easy to share your memories.

Send flowers to the Cook family.