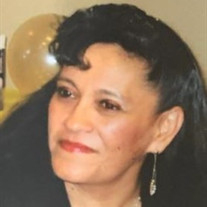 Martha Barron Gonzalez was born on January 20, 1959. At the young age of 14 she had to grow up fast as she left her hometown in Mexico to pursue the American Dream. Carrying with her only her ambition, determination, and God she risked everything so that she could taste the sweet rewards life had to offer. Although the odds seemed to never be in her favor, she was able to build her legacy in Phoenix. By her own unwavering will, she managed to teach herself how to read and write in English. Three years later, at 18, a new adventure began for her and her first husband Florentino Enriquez-- an adventure by the name Esmeralda Enriquez. Martha's legacy began and kept growing. Her next child came 18 months later, another daughter named Maria Del Carmen Enriquez. Maybe God knew that three girls in one house would need some balance, because three years after Carmen came Joaquin Enriquez... but he is better known by his siblings as the "Golden Child." As if the life of a mother and immigrant hasn't already proved to be a challenging one, Martha was left with little options but to keep going and providing for her son and daughters alone after the passing of their father. Anyone who knows Martha, knows she was fully prepared to go through life the way we came into it-- with only family and her faith. But God had other plans, introducing her to a man she would spend the rest of her life with-- Jamie Barron Jr. Their love flourished in the year of 1987 when they welcomed their baby girl Martha Elizabeth Barron, better known as "Peewee." It was 19 months after that, Martha gave life to her youngest son-- Joshua Jaime Barron, nicknamed "Chito." Throughout the years, Martha was able to experience the most joy planting God's will in the foundations of her family-- her children, her grandchildren, and even great grandchild. She worked very hard for them and for God-- even on her most exhausted days. Martha was a God-fearing and a God-loving woman who taught her family that without Jesus Christ, peace and true love was not possible in this world. Martha was as tough as she was faithful, so her family knew to cherish the moments she shared her affection. Most days she showed love through prayer and a profound mother's worry for her children and grandchildren. Her wish was for every one of them to have a strong relationship with God so that she could one day be reunited with them in Heaven. In the late weeks of December 2020, Martha fell ill and would eventually lose her battle, as so many others have this past year, to COVID. On January 21, 2021, just one day after her 62nd birthday, Martha gave her final farewell to her children, grandchildren, and her love Jamie. The pain of losing Martha sits heavy in the chests of every piece of her legacy, but God welcomed her home after realizing the reward that she had worked so hard for throughout her life on Earth-- her family. Martha once told her granddaughter Isela that her only regret in life was not being equipped with the knowledge of how to be a better mother when she was younger. Martha may have felt inadequate at times on this Earth, but her family has received confirmation that she's now free of pain, rejoicing in the Lord, and feeling accomplished at the honest men and women she raised and who carry on her hardworking and resilient spirit every day. Martha is resting with the her beloved mother Maria de Jesús González, her father Jose Cruz González, brothers, Rafael González, Enrique González, her sister Fransica Beltran González, and her brother Robert González-- who she joined just 4 days after his passing, Martha Barron is survived by her daughter Esmeralda and her grandchildren Caleb, Alexis and Noah; her daughter Maria Del Carmen and her grandchildren Violet and Fabian as well as her great grandchild Joseph AKA Chente birthed from Violet; her son Joaquin and her grandchildren Isela, Sebastian and Tatyana; her daughter Martha Elizabeth and her grandchildren Christopher and Dominic; her son Joshua and her grandchildren Anthony and Mariana; her husband of 36 years Jaime Barron Jr; her sisters María A. González, María Criollo, Dolores Criollo, Eladia Torres y Beatriz Gutiérrez and her brothers Jesús González, Lorenzo González and Isauro González, all of her beloved nieces, nephews and friends. We love you and will miss you!

Martha Barron Gonzalez was born on January 20, 1959. At the young age of 14 she had to grow up fast as she left her hometown in Mexico to pursue the American Dream. Carrying with her only her ambition, determination, and God she risked everything... View Obituary & Service Information

The family of Martha Gonzalez Barron created this Life Tributes page to make it easy to share your memories.