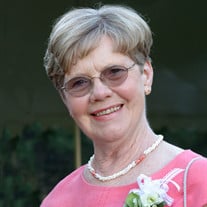 Martha A. Paul Martha Jane (Alcott) Paul, of Phoenix, Arizona, passed away peacefully on October 4. She was 87. Martha was born February 22, 1932 in Bridgeport, Conn., the daughter of the late George and Louise (Pike) Alcott. She grew up in Fairfield, Conn., graduating from Roger Ludlowe High School in 1950. Martha graduated from Sullins College, Bristol, VA in 1952. She married Alfred Paul, in 1955. The couple resided in Norwalk and later in Wilton, eventually retiring to New Milford in 1996. They became part-time “snow bird” residents of Phoenix, AZ in 2002, eventually relocating there in 2014. Following college, Martha worked for Fairfield County Publications and later was an assistant registrar of voters for the towns of Wilton and Westport. She was an active member of the Wilton Congregational Church for 32 years where she taught church school, served as deaconess, and was a member of the Board of Mission and Christian Service. Later, Martha became a member of the Congregational Church of New Milford, serving on the Called to Care Committee and volunteering at the church’s homeless shelter. Martha’s primary vocation was as homemaker and parent. She loved antiques and home decorating, and entertaining family and friends in her home. Martha loved Broadway and was an avid reader and bridge player. She followed politics ardently, especially at the local level. Martha loved to travel and especially enjoyed the cottage in New Hampshire, where the family spent summer vacations. Martha’s family remembers her with special love and appreciation as a devoted grandmother, who was ever-present and involved in her grandchildren’s lives, leaving a legacy of unconditional love and support. Martha was preceded in death by an infant son, Douglas Alcott Paul. She is survived by her husband of 64 years, Alfred Paul, of Phoenix, AZ; daughter Alison (Paul) Geislinger and son-in-law Stephen Geislinger of Phoenix; daughter Amy Paul and son-in-law Gerald Baskin of Sharon, MA. She is survived also by four grandchildren: grandson Dana Geislinger and granddaughter-in-law Lauren Geislinger of Chandler, AZ; grandson Galen Geislinger of Tempe, AZ; granddaughter Rachel Baskin and grandson Charles Baskin of Sharon, MA. A memorial service will be held Sunday, October 13, 1:00 pm at Mountain Park Senior Living, 4475 E Knox Rd, Phoenix (Ahwatukee). A service of internment will take place at a later date at Hillside Cemetery in Wilton, CT. In lieu of flowers, contributions may be made to Hospice of the Valley, Phoenix, AZ or the Board of Mission and Christian Service, Wilton Congregational Church, Wilton, CT.

Martha A. Paul Martha Jane (Alcott) Paul, of Phoenix, Arizona, passed away peacefully on October 4. She was 87. Martha was born February 22, 1932 in Bridgeport, Conn., the daughter of the late George and Louise (Pike) Alcott. She grew up in... View Obituary & Service Information

The family of Martha A. Paul created this Life Tributes page to make it easy to share your memories.

Send flowers to the Paul family.