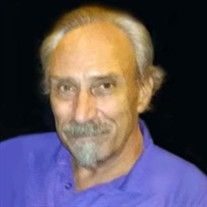 SMITH, Ralph Jerold (1959-2021) Catholic Mass and Graveside Memorial Service SMITH, Ralph Jerold, 62, beloved son, brother, father, and grandfather, passed away July 14, 2021 while resting on his bed in a men's group home in Central Mesa, Arizona after struggling for some years with medical related health conditions. A Catholic Mass memorial service is at 11:00 AM on Monday July 26, 2021 at "Saint Louis the King" Catholic Church (East end Main Sanctuary 2 story building), 4331 West Maryland Ave., Glendale, Arizona, followed by 1:00 PM graveside memorial service at "Resthaven Park Cemetery" (Located west of 63rd Ave., North of Northern Ave., Furthest North-East Section), 6450 West Northern Ave., Glendale, AZ. Interment and Survivors Interment at Resthaven Park Cemetery is located immediately next to his brother James Sheldon Smith (1962-1979), yet just opposite the graves of his mother Bertha Ellen Walkup-Smith from Okemah, Oklahoma (1926-2006) and father Floyd Jefferson Smith from DePauw/Frenchtown, Indiana (1914-1984). He was born June 18, 1959 in Bakersfield, California the fourth child to a family of six boys, with one of his five brothers, James Sheldon Smith, the fifth born, having died in December 1979 of a brain cerebral aneurysm at the age of 18 in Phoenix, Arizona. Ralph had lived in Maricopa County, Arizona permanently for 58 years from the age of 5 to 62. He is survived by his daughter Lindsay Ellena Myers-Rincon (daughter of Sheryl Germany) and grandson Adrian Alexander Rincon of Phoenix, Arizona, and four brothers: Wayne Keith Smith of Salinas, California, Gary Kenneth Smith, Larry J. Smith, and Charles D. Smith, all of Scottsdale, Arizona. Career and Personal Character Ralph Jerold Smith had exceptional knowledge and skill in the field of electronics and became successful in multi-disciplined areas of the trades to include plumbing and mechanical repair and house remodeling. During High School he attended the Area Vocational Center, trade-school, in Phoenix, where he studied electronics and later worked for an electronics firm in Glendale building as a service tech repairing sophisticated battery powered, portable, hand-held metal detectors. Later he was given the opportunity to own the business after the owner retired, and he ran it successfully for many years. After some escalated family issues, he chose to close the business and went into other fields such as building construction, and as lead mechanic in several large bowling alleys all around the Metro-Phoenix Valley to include Scottsdale and Goodyear, and residential home-remodeling. As his brothers recall, their brother Ralph was incredibly intelligent, hard working for his entire life, and had a phenomenal memory with strong analytical and problem-solving skills. Yet most of all, he had a kind heart and loved to serve others as he learned from his father of which was of the same good-natured character coming from his Midwestern, Indiana upbringing. His father taught him and all of his brothers to not prejudge others, treat everyone with respect, follow the Ten Commandments, and practice "The Golden Rule". Ralph Jerold Smith will be sorely missed by the surviving family members, Aunt Ruth Ellen Linton in Indiana, Uncle Lawrence Whitacre in California, cousins, nieces and nephews in California, Colorado, Florida, Hawaii, Illinois, Indiana, New Jersey, Utah, Virginia and Washington, work colleagues and friends. Memorials are suggested to the . Online condolences can be given at www.samfhaz.com.

The family of Ralph Jerold Smith created this Life Tributes page to make it easy to share your memories.

Send flowers to the Smith family.