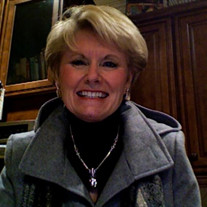 Rebecca Lois (Sandvick) Harter, "Becky" age 68, of Phoenix AZ and Nashville, TN passed away Friday, July, 17 2020. Becky, a native of Arizona, was born September 8, 1951, the daughter of Robert Sandvick and Patricia (Braatelien) Sandvick. She graduated from East High, Phoenix, AZ in 1969 and married Bill "Butch" Harter in 1970 and together they had five children. After having her first two children, Becky went back to school and graduated at the top of her class in 1976 with a degree in Nursing. Becky moved to Nashville in 2008 to be closer to her children who were pursuing music careers. She loved Nashville and called it her home for the last 10 years. She was best known by her grandchildren and many others as "Momo" or "Mo" and was cherished for her powerful and ever loving spirit. She always ended an evening with family and friends by confirming the power of God and the Universe. These evenings were cherished and will be missed beyond measure. She loved her family and friends deeply and devoted her energies to her children and grandchildren, whom she loved and adored more than anything. Becky had countless talents. One being China painting, a talent she learned from and enjoyed with her mother. She was also a published author, writing a Harlequin romance novel under a pen name, as well as a book titled "Jenny," which was inspired by the song written by her children, J Michael, Leslie and Scott, who were in a successful country music band known as "The Harter's." She loved to travel and ventured to exotic locations such as the Amazon jungle and Machu Picchu, Peru. Her love of travel was shared with her cousin Connie and close friend Lisa. Becky's adventures included trips to Nova Scotia, Hawaii and Canada, along with stops across the US including Woodstock, NY along with many other American parks and landmarks. She was known to many as "Bible Becky" due to her in-depth knowledge of the "Good Book" as she called it. Becky inspired all who knew her to examine the Bible and look deeper than traditional teachings. She was a spiritual inspiration to all who knew her and that wisdom will not be forgotten. Becky's spiritual connection is the legacy she leaves behind. Many will miss the counseling and guidance she provided. Becky was preceded in death by her parents, Robert and Patrica Sandvick, brother Robert Sandvick Jr, grandparents Arnold and Alta Braatelien and Ole and Gustine Sandvick. She is survived by her five children: Brandy Peterson (Eric), Shannon Alexander (Mike), J. Michael "Mike" Harter, Leslie Harter and William "Scott" Harter. Along with her ten grandchildren; Mickenzie, Kaysie, Ashton, Jack, Carter, Carlee, Caroline, Grace, River, Aspen and many other family members and friends. At a later date, family and close friends will be celebrating her life in a private ceremony. There are no words to express how much Becky will be missed. Those who knew her well, know that she will always be close by. Beloved daughter, sister, mother, grandmother and friend. We love you Mo!

The family of Rebecca Harter created this Life Tributes page to make it easy to share your memories.

Send flowers to the Harter family.