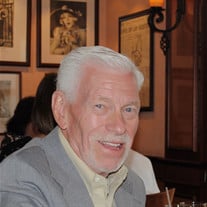 Richard Joseph Atkinson, 87, of Scottsdale, Arizona passed away on July 3, 2021. Richard grew up in Saugus, Massachusetts, the fifth child of seven born to James and Yvonne Atkinson. Richard enjoyed growing up with his brothers and sisters, often sharing memories of swimming in the Saugus River in the summer, and literally shoveling coal into the basement furnace during those bitterly cold New England winters. (The youngest boy had the chore of shoveling coal!) Richard loved his country, having enlisted in the Air Force in 1951, serving in the Korean War, Greenland, and the United States in the area of Electrical Power Production. Richard was honorably discharged at the rank of Staff Sergeant in 1961. Richard’s last military assignment was with the 904th Aircraft Control and Warning Squadron based near Winslow, Arizona. Richard decided to put down roots in the high desert town of Winslow, beginning a career with the Santa Fe Railroad and starting a family. Richard initially “got on the Santa Fe” as an electrician with the Signal Crew. Over the years, his mechanical, electrical, and problem-solving skills led Richard up the ladder in the area of locomotive maintenance, including Round House Forman and ASDE Assistant Supervisor. These management roles kept the great trains and goods moving 24/7. Richard had a yearning for the rails and eventually aspired to become a locomotive engineer, serving as an engineer from the mid-seventies until his retirement in 1996. Together, Richard and Donna McBride raised two sons in Winslow, Chris and Jason. Richard always set an example for his boys of hard work, respecting others and serving as a good friend to others. Richard was a long-time member of the Winslow Elks Club, including serving in leadership roles, however his most enduring legacy are his ever growing circle of friends from all different seasons of his life. Richard always had a passion for cars and boats, the faster the better. In the late 50’s and early 60’s, Dick, as he was affectionately referred to by his friends, won numerous drag racing titles including the Super Stock and Stock Eliminator brackets. When Richard transitioned out of drag racing cars, he discovered a love for fast drag boats. Sharing this passion with his friends, the boats became bolder, sharper, faster and louder. Richard enjoyed always working and upgrading the hulls and engines and the friendships that ensued. Many, many sunny days were shared with friends at Cholla Lake and Lake Powell. It was difficult to catch a fish at 100 miles an hour, so Richard partnered on a family friendly cabin cruiser, so more experiences ensued with the ski boat and the larger boat sailing together. After Retirement in 96, Richard finally warmed up by relocating to Scottsdale and basking in the sun. He soon became a favorite in his condo complex and was known as a nice and helpful man with a quick smile who enjoyed his convertible Ford Mustang and hanging out by the pool. If anyone needed help or a tool, Richard was the go-to guy! Not long after retiring, Richard was blessed with grandson, Kyle Atkinson, and granddaughter, Carly Atkinson. Richard lived near his Kyle and Carly and made sure to see them often, relishing his title as “Gramps”. Richard passed away at the age of 87 after a short illness. He was fiercely independent to the end, made peace with his Creator, and died knowing he was Loved. Gramps will be sorely missed and celebrated by family, friends, and neighbors. He is survived by his son Chris Atkinson (Jeannie), his son Jason Atkinson, grandson Kyle Atkinson, granddaughter Carly Atkinson, and six siblings; Lenny, Jimmy, Bob, Irene, Pat and Jean. Military Honors Ceremony will start promptly at 9 am. Reception immediately following at Mimi's Cafe located at Desert Ridge Marketplace.

Richard Joseph Atkinson, 87, of Scottsdale, Arizona passed away on July 3, 2021. Richard grew up in Saugus, Massachusetts, the fifth child of seven born to James and Yvonne Atkinson. Richard enjoyed growing up with his brothers and sisters,... View Obituary & Service Information

The family of Richard Joseph Atkinson created this Life Tributes page to make it easy to share your memories.

Send flowers to the Atkinson family.