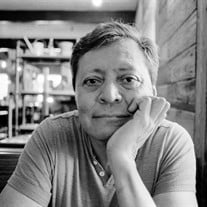 Roberto González, age 59, passed away January 17, 2021 in Phoenix, AZ he was preceded in death by his beloved mother Maria de Jesús González, his father Jose Cruz González, brothers, Rafael González and Enrique González, also sisters Fransica Beltran González and Marta Barron who join him in paradise five days after he passed. He is survived by his beautiful wife of 36 years Guillermina González, his four kids Noemi, Ruth, Obed and Josue, along with their spouses Christopher, Ricardo, and Lindsey. The loves of his life, his grandchildren Olivia, Sophia, Emilia, Sydney, Aaron and Isabella. He is also survived by his sisters María A. González, María Criollo, Dolores Criollo, Eladia Torres y Beatriz Gutiérrez and his brothers Jesús González, Lorenzo González and Isauro González, a host of nieces, nephews and many friends. Roberto was born in Guanajuato, Guanajuato Mexico on June 4, 1961. During his childhood he moved to the city of Leon, Guanajuato. At the age of 21 he had an encounter with the Lord and began a life of serving Him. He also met the love of his life at age 21, Guillermina and after dating for two years they married on July 1st,1984. They quickly started a family and in 1985 welcomed their first daughter Noemi, followed by Ruth in 1986, then Obed in 1988, with their final son Josue in 1989 Throughout his life Roberto worked for the Red Cross, hand built mobile medical and dental vehicles to help serve those in rural and lower income neighborhoods, and served in the Mexican Military. He was a friend to so many and would do anything he could to help those in need! He was creative, kind and loved to build things. More than anything Roberto was a loving Husband, Father and Grandfather. He loved spending time with his family - especially his grandchildren. They were the loves of his life! He was and will forever be “Papa Bear”. Roberto loved spending time with his brothers and sisters, he loved Christ and his church family. He enjoyed being involved in every church activity. There are simply not enough words in the world to describe how wonderful Roberto was, and all of the ways he impacted those around him. His memories will live on through those who were lucky enough to know him. Roberto will be dearly missed by all who knew and loved him.

The family of Roberto .Gonzalez Moreno created this Life Tributes page to make it easy to share your memories.