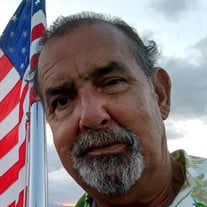 Rufus A. Gonzales ‘Tony’ passed away July 18, 2020 at 74 after having endured many years of Parkinson’s, Diabetes, and heart problems. Tony was born on June 22, 1946 in Spiro, OK to Marcus and Nellie Veda Gonzales. When he was about 12 years old the family moved to California settling in Norwalk. He enlisted in the Air Force and was sent to Vietnam, but before going overseas he married his high school sweetheart Christine. They had two sons, Marc and John. After serving his tour overseas he was stationed in Alamogordo, NM and Las Vegas, NV. Upon leaving the Air Force and moving back to Southern California he joined the LAPD. Later on, he went into the aircraft industry in various capacities. While working as a source inspector at Western Gear he met and married Marie. Tony and Marie moved to Phoenix, AZ in 1989. He moved into the heavy machinery field as a systems engineer and inspector for Empire-Caterpillar in Mesa, where he stayed until his retirement in 2010. He loved fishing, boating on the Colorado river, RV camping, street rods, guns, rebuilding antique radios and his dogs Ginger and Storm. He is survived by his wife of 33+ years, his sons Marc and John, granddaughters Christine (Michael) and Muriel (Brandon), great grandchildren Maverick, Nathan and Avery, his stepchildren Kris, Monica and Paul and step granddaughter Aniko, brothers-in-law Barney (Judy) and Charles (Debby), one Aunt and many Cousins. He will be greatly missed by his family and friends. Love to my husband, father, grandfather, and great grandfather.

The family of Rufus Anthony Gonzales created this Life Tributes page to make it easy to share your memories.

Send flowers to the Gonzales family.