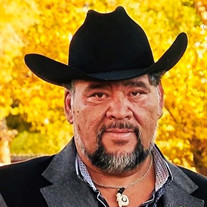 On Sunday August 2nd, 2020 Santiago Hidalgo, loving husband, father of 6 passed away at the age of 64 surrounded by his family after loosing his battle to cancer. Santiago Hidalgo Luna was born July 27, 1956 in Zacatecas Mexico to Maria and Roman Hidalgo. Santiago was the third son out of seven, yes. they were a band of 7 amazing brothers of which Santiago was known to steal their sandwiches, drink their milk and hence became the biggest most strongest and he would say the most handsome of the seven (his wife agrees). At the age of 19 he married the love of his life Raquel. They were blessed with 6 children and raised them in Phoenix Arizona. Last year they had the opportunity to renew their marriage vows on Holy Land in Jerusalem. Additionally they re committed their faith by being baptized in the Jordan River. They retraced Jesus footsteps, guided by Father Andres Arango who will also officiate his funeral mass. Santiago fulfilled his dream of obtaining his CDL and drove a semi truck throughout 47 states. Florida did not have the honor of his presence. Eventually through hard work he owned his own truck as an owner operator. Throughout his 37 year career he drove a total of 5 million miles without any accidents. That is equivalent to driving around the world 200 times. Santiago loved to read, indulge in dramatic novellas, allow the ocean to tumble him around and serve at his church Holy Family. He served in the Men's Club, Ministry of Baptism, Marriage Ministries, Public Speaking Ministry and was a member of the Cursillistas (De Colores). He enjoyed Amateur Radio and went to international Amateur Radio Conventions with a call sign of Bronco, his wife Raquel was Rayito de Luna. Santiago was best know as a social butterfly who believed the very best of others, never held a grudge and was very generous with his love, time and resources. He loved composing poems but gave the physical impression of being a scary, mean person. His humor and personality was childlike, playful and innocent. Santiago lived his life with an intense love for God, family and his work. He will forever and always be in the hearts of his surviving loved ones. He is survived by his mom Maria, his wife Raquel, his children Kathya, Nina, Roman, Karina and Cristina; his brothers; Manuel, Eliseo, Frederico, Miguel and Ruben. He has 9 grandchildren, one great grandson, 3 dogs, 7 grand dogs, a stray grandcat that we don't like to count because it kills quails, and countless nieces and nephews who adore him. He is preceded in death by his father Roman, his son Roman Jesus, his brother Jose-Angel (by 7 days) and his grandson Braylen. In his memory plants or flowers for his wife can be sent to the private residence.

On Sunday August 2nd, 2020 Santiago Hidalgo, loving husband, father of 6 passed away at the age of 64 surrounded by his family after loosing his battle to cancer. Santiago Hidalgo Luna was born July 27, 1956 in Zacatecas Mexico to Maria and... View Obituary & Service Information

The family of Santiago L Hidalgo created this Life Tributes page to make it easy to share your memories.

Send flowers to the Hidalgo family.