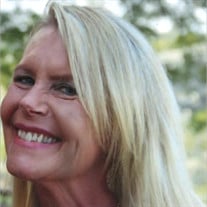 It is with great sorrow that we announce the passing of Suzanne DiCarlo, who died far too early on August 29, 2019 in Phoenix, Arizona. Suzanne was a beautiful woman with a beautiful soul and she will be sorely missed. Suzanne was born in Sioux City, Iowa on February 17, 1958, the daughter of Charles and Mary Freyer. She received a BA in English Literature from the University of Iowa, where she was invited by faculty to join the prestigious Iowa Writers' Workshop for poetry. After graduating she moved to Arizona and became a certified paralegal. It was there that she met her husband of 30 years, Nicholas. They married on March 4, 1989, moved to New York and started a family. After returning to Arizona in 1997, Suzanne transitioned to her true love--teaching young children. In furtherance of this admirable work, Suzanne was awarded a Master's degree, summa cum laude, from the ASU Mary Lou Fulton Teachers College. No account of Suzanne's life would be complete without mentioning Suzanne's tireless devotion to all of her little students, to whom she was affectionately known as "Miss Suzanne." Every lesson was assiduously prepared, usually on evenings and weekends, and she often used supplies and materials that she purchased at her own expense. And all the while, Suzanne found time to be a loving wife and mother to her three children. She was the proverbial "super mom" who was deeply involved in her children's busy lives. Not a week went by without Suzanne attending a sporting event, a theater production, or one of her daughter's innumerable dance shows and competitions. She served on many boards and committees connected with her children's activities and spent many hours planning and attending fundraisers and events and hosting functions. As befitting an English Literature major, Suzanne was a voracious reader throughout her life. In her later years it was commonplace to see her with a book in her hands preparing for one of her many book club meetings, all of which she immensely enjoyed. When Suzanne died she was in the middle of one such book. We are all so very sorry that she never reached the end. She will be cherished in our memories forever. Suzanne is survived by her husband Nicholas, and her three children Alexander, James, and Lauren, her daughter-in-law Rachel and her grandson Jonas. She is also survived by her mother Mary, and brothers Jon, Ted, and Daniel. She was preceded in death by her father Charles and her brother Douglas. Suzanne's family invites you to join them at a memorial service and reception Friday, September 6th at Corpus Christi Catholic Church located at 3350 E Knox Rd, Phoenix, AZ 85044 from 3 to 5 pm. In lieu of flowers, donations can be made in Suzanne's honor to the charity of your choice.

It is with great sorrow that we announce the passing of Suzanne DiCarlo, who died far too early on August 29, 2019 in Phoenix, Arizona. Suzanne was a beautiful woman with a beautiful soul and she will be sorely missed. Suzanne was born in... View Obituary & Service Information

The family of Suzanne DiCarlo created this Life Tributes page to make it easy to share your memories.

It is with great sorrow that we announce the passing of Suzanne...

Send flowers to the DiCarlo family.