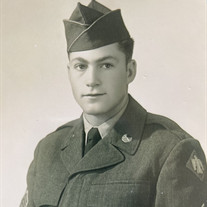 Thurman H. Bilbrey, (T.H.) passed away unexpectedly on December 13, 2020 in Scottsdale, AZ at the age of 88. Thurman was born in Geary, Oklahoma to Thurman H. and Martha Bilbrey. He spent his youth growing up in Weatherford, Oklahoma and after graduating from High School, he joined the Army and was sent to fight in the Korean War. After returning stateside, he enrolled and then graduated from the University of Oklahoma with a degree in Industrial Engineering in 1957. He then decided to continue his Army career as an officer. He married Georgia Chambers in January of 1962 at Ft. Rucker, Alabama. After two tours in Vietnam as a helicopter pilot, he returned home to his wife and two daughters. He spent 3 years in Germany and finished out his military service as a Colonel stationed at Ft. Leavenworth, Kansas. He moved back to Oklahoma in 1979 and began working as a civil servant at Tinker Air Force Base in Midwest City, Oklahoma. He eventually accepted a position as an accident investigator in the oil and gas industry. In the mid-1990s he retired and started to enjoy the things he liked which were fishing, farming, and planting pecan trees. Thurman had a wonderful sense of humor and loved to laugh. He was an avid news enthusiast and always wanted to check the stock market. He would watch local and national news several times a day. He also loved to work with his hands, building and repairing things in his garage. He loved his family and especially loved being “Papa” to his five grandchildren. Thurman is survived by his daughters, Diane Basgall, (Scottsdale, AZ), husband Bill and their two children, Evan and Olivia and also his daughter, Carol Becker (San Ramon, CA) husband Doug and their three children, Alicia, Thomas and Jaden. He is also survived by his sister, Peggy Scruggs and husband, Warren, many nieces, and one nephew. Of special note was his relationship with his niece, Linda. She lovingly cared for him and he had a special place in his heart for her.

Thurman H. Bilbrey, (T.H.) passed away unexpectedly on December 13, 2020 in Scottsdale, AZ at the age of 88. Thurman was born in Geary, Oklahoma to Thurman H. and Martha Bilbrey. He spent his youth growing up in Weatherford, Oklahoma and after... View Obituary & Service Information

The family of Thurman H Bilbrey created this Life Tributes page to make it easy to share your memories.

Send flowers to the Bilbrey family.