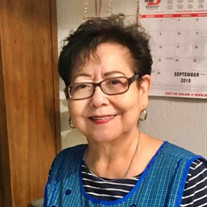 Virginia “Ginny” Alice (Cañez) Castillo, 74, of Goodyear was reunited with Jesus on January 27, 2021. Virginia was a loving wife, mother, sister, daughter, Nana, Tia, cousin, and friend. She was born November 26, 1946, premature and with a heart murmur, to Belen and Armando Cañez in Phoenix, AZ. Virginia was one of fourteen children. She grew up on Pima St, and attended Lowell and Bethune Elementary schools. She received her GED through the Job Core. She worked at Andy’s popcorn shop, inspected vegetables, and inspected flares. Virginia and Herman Castillo were married November 14, 1969. She gave birth and raised three children Mando, Gabriel, and Eleanor. She stayed home to raise her family. In 1987, Virginia became sick and had to have emergency open heart surgery. The doctors said she was a walking miracle. It was after this event that she developed more health issues. She fought every day to be healthy. Whatever it was she faced, she had no fear. She had her full trust in the Lord. She often put on a face that she was feeling good, when she wasn’t or when she was in pain. Virginia was a great cook. She took pride in everything she made. If it wasn’t to her liking, it wasn’t getting served. She was known for her popcorn balls, carne con gravy, pork fried rice, and tortillas. The most important thing about Virginia is that she was a follower of Christ. She was a member of St. John Vianney’s parish. She was a servant, a fisher of men. Anywhere and everywhere she went, she was spreading God’s word and love. She always tried to plant the seed of God’s goodness in everyone. She carried her cross with no complaints. She always said she was glad that she was the only child that was sick in her family, so her mom didn’t have to worry about more than one kid. Virginia is survived by her beloved husband of 51 years, Herman. She is also survived by her children, Mando, Gabe, and Eleanor; grandchildren, Gabe Castillo Jr, Zackery Castillo, Dillon Castillo, Gia Yates, Kaylee Castillo, and Nico Yates; great grandchildren Trig, Kyler, Ali, Izaac, Joey, Ezra, and Anna; mother, Belen Cañez; brothers Frank Cañez, Gilbert(Gloria) Cañez, Felipe Cañez and Freddie(Joanne) Cañez; sisters, Rosie(Lupe) Garcia, Mary(Johnny) Garcia, Dolly(Jimmy) Renteria, MariaLuisa Cañez, and Gloria(Tony) Cañez-Lovett. She was met in heaven by her brothers, Armando Cañez Jr. and Larry(Vera) Cañez, sisters Mary Eleanor(Arnold) Moreno and Catalina(Guillermo) Monreal; father Armando Cañez; grandson, Anthony Castillo. Virginia was a mom not just to her own children, but to so many others, the same goes for her title of Nana (Gigi) and Sister. She loved everyone with a special kind of love, and you felt it.

The family of Virgina Alice Castillo created this Life Tributes page to make it easy to share your memories.

Send flowers to the Castillo family.